Since their debut album for INFRACom!´s 10th anniversary in 2002 [re:jazz] have built up an excellent reputation for being one of the internationally most successful jazz to come from Germany in the recent decade with, so far, more than 80.000 copies sold and over 80 contributions to compilations worldwide. They published five studio albums, one live album and two remix albums in the last decade.

The way [re:jazz] treats and re-works music has achieved such an enomous popularity that beside their own releases other well known artists like 4Hero or Stephan Remmler asked them to rework a pieces of their music too.

Their second album „Point of View“, released in 2004, was highly acclaimed by the press and followed by a successful club tour and invitations to renowned jazz festival like Traumzeit, City Jazz Nights, Leverkusener Jazztage, Balaton Sound Festival, Jazzfest Vienna and others.

„Expansion“, the third album (released in 2006), presents a new side of the the band. Besides awsome reinterpretations, [re:jazz] released their first own compositions, fitting perfectly into their [re:jazz] style.

In spring 2008 they returned with a brand new 2-disc release feat. their first live album recorded at the 'Motion Blue yokohama" during their Japan tour.

Besides the live album there is a 90 minute dvd documentary about [re:jazz] touring and performing live in Japan with interviews, statements from and about [re:jazz] to give you a closer look at the group themselves. Combined with impressions from Japan and the wonderful people they met during their tour, the dvd is more then a pure concert dvd. It takes you on a journey with the band throughout Japan.

Their fourth album 'Nipponized' was released in autumn 2008. Together with the live album it rounds up the 'little' Japan series of [re:jazz] and features re-interpretations of japanese club-music classics besides new compositions by [re:jazz].

“Electified” from 2010 is the second collection of electronic interpretations of their music. Most of the titles – to date unpublished – make reference to originals from the studio album “Nipponized” that appeared in 2008. Also included are interpretations of older [re:jazz] titles. However, Electrified starts with a new title (“Star Chasers”) which the band has reinterpreted at the request of UK Nu Jazz Legend 4Hero.

The self-chosen dogma in the earlier albums of creating acoustic versions of electronic originals is abandoned on their 2012 release "Kaleidoscope" and the repertoire focuses on own compositions. Still using jazz as basic vocabulary, the Frankfurt band project around jazz pianist and DJ Matthias Vogt takes the liberty of extending this freedom. Over the years, [re:jazz] has developed an own language of form which is still in the area of conflict between acoustic and electronic music and for which they are internationally recognised as pioneers, but which they use with considerably more electronic references on "Kaleidoscope". A further remarkable change has left its mark on Kaleidoscope. The new voice of [re:jazz] : the singer  "Mediha" who, following the departure of Inga Lühning in 2011.In addition, the regular seven-man formation has been joined for the anniversary by several musical guests: The most prominent of these is undoubtedly the singer of the Brand New Heavies, the wonderful N'Dea Davenport and the Berlin star trumpeter Studnitzky.

....and the journey continues. 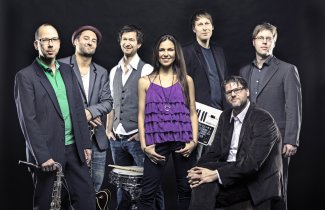 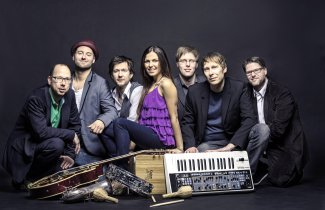