Alex Puddu
was born in Rome, Italy, in 1967 but moved to Denmark at the age of 19 and quickly established his reputation as a musician in a number of indie rock bands. he Recorded he's first E.P with the band Excess Bleeding Heart" followed with The album "Libido".In the early 1995 he formed the Band "Nerve" with he's mate Morten Varano and 3 members of the band Sandman .They got sign with EMI and release one EP and the Album Speeed Freak Jive. Nerve got along by touring in DK and even a opening support show for David Bowie i Valby Hall.In 1997, The Band spilt up ,Alex Puddu and Morten Varano founded the groundbreaking electronica duo Puddu Varano and released three albums and a number of singles before splitting up in 2002.
Today Alex puddu is one of the most direct and creative artist and composer of our days, truly devoted to the italian vintage sound of the giallo/horror movies from the early seventies. Alex take inspiration for his writing from the soundtracks music maestro such as Piccioni,umiliani,morricone,ferrio,demasi.Alex puddu release is first solo album 'Chasing The Scorpions Tail' with his cinematik band Alex Puddu and the Butterfly Collectors on the danish label April records followed later on with fouralbums.
During the latest years 2010/11 Alex is been very productive working on new sounds and composotions for soundtracks writing arranging and producing no more less then 4 soundtrack
The Eastern Army,Mosaic,Hell is other people and the latest The Golden Age of Danish Pornography 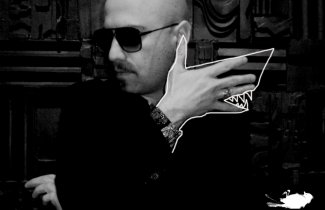