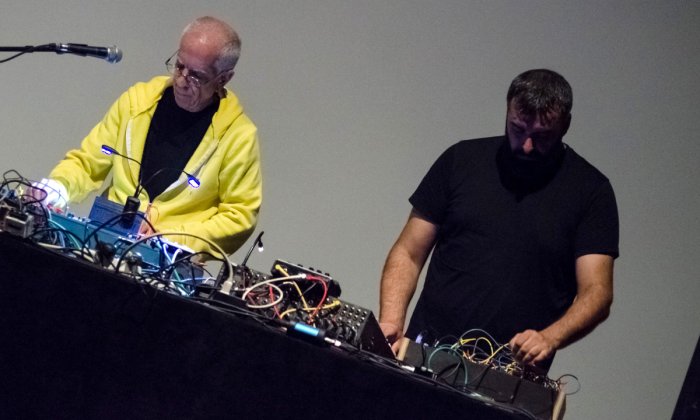 "Synthesizers are the sound of the future" Giorgio Moroder said.
Imagine a remote galaxy, in a future civilization, tinted in aliens colors and surrounded by new sabstracts sounds. Sounds never heard before, but at the same time soo familiar.
Look at the stars if you can, press play on the track below and let your imagination start. What we're telling could came from there, or from the more recent past.

Apart #01  took place on Tuesday August 26. The newborn International Festival of Electronic music, curated by Pas-E Association,  was held in the beautiful frame of the Venetian theatre Palazzo Grassi. We had the occasion to assit at the premeiere of the last venture by Morphine Records label.

We will try to make you a description of the event, trying to convey the feelings and the sounds perceived.

The theater falls silent. Rabih Beaini aka Morphosis is opening the show, with his performance at the modular synthesizer. Everyone relish the flow of sounds, which blend together in irregular rhythms, evolving, creating the atmosphere for what will follow.
A final deep and rustling echo, and then the silence, only broken by the well-deserved applause for Beani.

The lights goes off, leaving just the time to see the auditorium, which quietly, in the meantime, has filled of peoples.

Charles Cohen takes his place on the stage. In front of him, enclosed in a blue case full of electrical wires, his instrument, one of the last fully functional Buchla Music Easel synthesizers.
With slow and precise actions, plunged in the semi-darkness, Charles turn on one by one the electrical circuits, as following a ritual repeated every day for decades . Cohen's improvisation is pure spectacle, in it's most essential and pure form.
As the firsts rhythms and melodies arises from the instrument, the atmosphere around becomes magic, transporting the audience in a journey through electronc forests and waterfalls, distant galaxies whit their cosmic echoes, primordial rhythms and chants of copper and silicon birds.
Charles is able to skillfully play with the rhythm, chenging it on the go, sometimes sitting it aside for minutes, in long pauses where acute and abstracts sounds breaks rustling and pulsing silences, but he proves to remain firmly anchored to the rhythm making it gently re-emerge.
A overwhelming musical ecstasy flows between the public for the entire Charles's performance.
Applauses and then silence again. Charles takes apart in the side of the stage, lefting space to Upperground Orchestra.

The collective of musicians, consisting of Thomas Cappellato, Alvise Seggi and directed by Rabih Beani surprises for the original approach to the instruments. With their free-jazz virtuosities they sets the frame for the abstract sounds improvised by Rabih at the synthesizer. The jam session becomes complete when Charles, surprisingly, comes back on his Buchla Synthetizer and joins it. One last half-hour of compelling rhythm, which at times makes you want to get up from your seat and dance, and the evening ends in a full success.

The young organizers of the event reassure us, there will be other Apart. Considering the quality of this first edition, we can certainly expect big surprises.

In this age where information travels fast and the fame can be reached even at a very young age, someone like Charles Cohen almost risked to pass unnoticed.
It is thanks to the careful Rabih Beani aka Morphosis, label manager and composer of Morphine Records, that we can now listen to his works.
Cohen began his career as a composer in 1969, becoming a pioneer of the Buchla Music Easel, a rare synthesizer produced in very few copies by Don Buchla in 1972.
He works primarily for theater and ballet, preferring unrecorded live improvisation as reserch of the maximum freedom of expression, without commercial compromises.
This radical approach has brought to remain outside the public radar, until Rabih asked him to publish for his label the collection "A Retrospective of Early Works 1978-1989", in which Charles's work gets the right attention.
Morphine also print a remix of "Dance of the spiritcatchers"  by the hand of Rabih itself, a song which in its original version of the '79 anticipates the Techno revolution of the 80s. Now that the hard work of Charles has the recognition which deserves, it has become a part of the legend of electronic music.

Rabih Beani, aka Morphosis, borns in Lebanon and moved in Veneto in '96. He is a experimenter, suspended between free-jazz improvvisation and underground techno. His rafinated and ecentric musical taste soon collides with a local music scene that leaves little space for everything outside the guaranteed profits from pop music. To excape from this profits-based sistem, and to reamedy the non-knownoledg disease, he founded with Stefano Boatti the label Morphine Records. Morphine borns to be a refuge from external influences and to promote new ideas, music and collaborations. From birth till nowdays, Morphine records continues to realize these ideals, raising the quality of production and printing masterpieces as this collection of Charles Cohen's works.